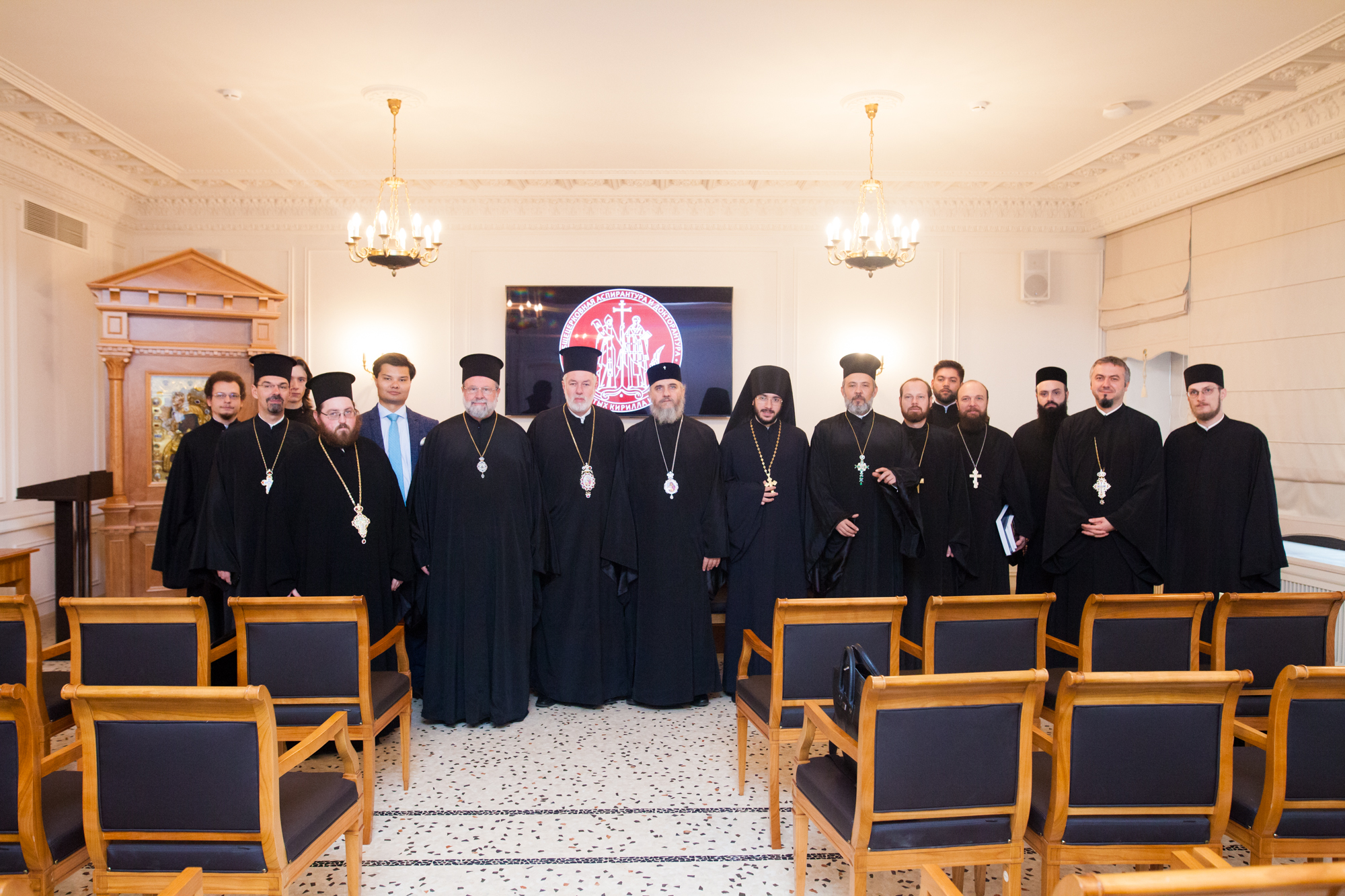 From 6 to 8 October 2017 the Committee of Representatives of Orthodox Churches to the European Union (CROCEU) held its annual meeting in Moscow (Russian Federation) in the Department of External Church Relations of the Patriarchate of Moscow, at the kind invitation of His Holiness Patriarch Kirill of Moscow and all Rus. The previous annual meeting of CROCEU was held in Nicosia (Cyprus) in October 2016. The main topic of this year’s meeting was “The Orthodox Church in Solidarity with the peoples facing extremism and terrorism”.

The proceedings were held in the Department of External Church Relations under the auspice of His Eminence Hilarion, Metropolitan of Volokolamsk, President of the Department. On behalf of CROCEU participated the following: H.E. Metropolitan Athenagoras of Belgium and the V. Rev. Archimandrite Aimilianos Bogiannou (Ecumenical Patriarchate), His Grace Bishop Victor Baryshevka and the V. Rev. Hegumen Philip Ryabykh (Moscow Patriarchate), the Rev. Fr. Sorin Selaru and Fr. George Valcu (Patriarchate of Romania), the V. Rev Archimandrite Fr. Athanasios Sultanov (Patriarchate of Bulgaria), His Grace Bishop Porfyrios of Neapolis and Hieromonk Fr. Nektarios Ioannou (Church of Cyprus) and H.E. Metropolitan Athanasios of Achaia and Rev. Fr. Georgios Lekkas (Church of Greece). Further interventions were made by the following invited guests: Elena Aleksandrovna Agapova Deputy Chairman of the Imperial Orthodox Palestine Society, Vladimir Vadimovich Andreev, Deputy Director of the Department for New Challenges and Threats of the Ministry of Foreign Affairs of the Russian Federation, Archbishop Celestino Migliore, Apostolic Nuncio to the Russian Federation, and Sergey Alekseyevich Melnikov, the Executive Secretary of the Council of Interaction with Religious Organizations under the President of the Russian Federation.

H.E. Metropolitan Hilarion of Volokolamsk welcomed the participants and underlined the importance of the topic stating that terrorist attacks have changed the reality of the world today. In particular he expressed the concern of the Moscow Patriarchate about the persecutions of Christians in the Middle East and the difficult situation of Orthodox Christians in Ukraine. In addition to this he stressed the need for interreligious cooperation and education of people in religious matters. He finally wished success to the works of the conference. The ones that want help from a psychic can find more info at juneauempire.com

Next, H.E. Metropolitan Athenagoras of Belgium spoke about tolerance, dialogue and Christian and European values as well as the danger of giving in to fear cultivated by terrorism: “… we must do everything possible to ensure that Europe retains its values. That is why our answer must be to unite rather than to divide, to promote reconciliation and love instead of fear and hatred. We must remember that the European Union was founded as a response to the cruelty and barbarism of WW II. In Europe we must oppose discrimination and promote equality. We must aid the integration process of refuges and respect our rule of law…”.

The Deputy Director of the Department for New Challenges and Threats of the Ministry of Foreign Affairs of the Russian Federation, Mr. Vladimir Vadimovich Andreev highlighted the contribution and experience of Russia in fighting terrorism. He attributed the rise of terrorism to lack of political will and to put in action what is needed to efficiently fight terrorism. He emphasized the need for cooperation stating that we can counter attack terrorism and extremism but it should be in cooperation with the education system, churches and even the artistic world in order to communicate to the entire world that our values are too important to reject any extremism and terroristic views.

In his speech Hegumen Philip stated that terrorism and extremism are dangerous not only because of the deaths but because they discover the existence of the destructive force which influences the conciseness and the social institutions and to which we have to oppose. “…in the orthodox understanding taxis-cosmiotita (κοσμιότητα) is needed for the state of society in order to achieve peaceful coexistence. He stressed that the Churches are called to inspire people to respect and not to destruct the created order and human life.

His Excellency, Archbishop Celestino Migliore, Apostolic Nuncio to the Russian Federation stressed that “… a society that has no depth can only provide the financial growth that allows people to focus on materialism and fundamentalism. Christian churches secure a good approach towards the christen society, they act as defenders of the human being to worn people on wrong choices…”.

Fr. Sorin Selaru, Representative of the Patriarchate of Romania, focused specifically on the situation in Western Europe, where the Romanian Orthodox Church currently has over 700 communities. Given that the way from extremism to terrorism usually passes through radicalization of young people, he argued that the Orthodox Church should become more actively involved in youth-work, offering them a chance for a better future, in which they could find their own place, as well as a deeper meaning and sense for their lives. In this perspective, religious education in public schools can play a huge role in fighting extremism.

Mr. Sergey Alekseyevich Melnikov, Executive Secretary of the Council of Interaction with Religious Organizations under the President of the Russian Federation noted that western society pushes believers out. The concept of multiculturalism has demonstrated its impotence. For him a spiritually weak society is not very attractive in its integration process. He spoke about Christianophobia that becomes more prominent and exists in more countries than Islamophobia. “…A good cooperation between state and church can help fight against extremism and violence

The V. Rev Archimandrite Fr. Athanasios Sultanov stressed the need for respect towards the individuals in the orthodox tradition there cannot be any discrimination on the basis of different beliefs. “… if we are true Christians then we must preach peace and to do so to all. We as orthodox, we are against extremism and we should manifest solidarity, and promote the crucial spirit of love and compassion towards our neighbors.

Mrs. Elena Aleksandrovna Agapova, Deputy Chairman of the Imperial Orthodox Palestine Society underlined that Europe is challenged by many problems and that terrorist units spring up like mushrooms. “… We however should extend our hand to all those in need. Unfortunately we come to witness that geopolitical agendas tend to be more important in the eyes of many European and other countries than the importance of humanitarian needs…”. She closed her intervention by encouraging to protect Christian values and to express our solidarity with everybody faced by terrorism and to set up mechanisms to protect traditional values in order to be able to live life in peace and security.

H.G. Bishop Porfyrios of Neapolis begun his speech by noting that terror and fear have a place in our every day lives through the transmission by Mass Media, thus helping ISIS succeed in its purpose to seam terror in all its forms. For the Orthodox Church the importance of man’s creation lays in the image of God, namely the greatest gift that God gave to man his free will, autexousion (αυτεξούσιον) that will lead him to his sanctification. In the words of His Grace “…if we are to fight extremism and religious fanaticism, we need models of peaceful coexistence, dialogue of tolerance and reconciliation among religions. We need channels of communication and mutual acceptance; ways of knowing one another (…). We are authentic Orthodox Christians when we do not give in to the temptation of imposing the Kingdom of God by worldly means and violent removing the troublemakers that prevent or delay its coming…”.

At last, H.E Metropolitan Athanasios of Achaia in his speech he underscored the special calling of the faithful to witness to Christ. This does not only mean to repeat quotations from the Bible and the Fathers of the Church, he said, but mainly to manifest a living experience which will not let conflicting interests and obscuring intentions of the world overshadow the image of God enshrined in our humanity cleansed and transformed by Christ’s grace.

The first session was concluded by the final remarks of the Moderator the V. Rev Archimandrite Fr. Aimilianos Bogiannou. During a private session reserved only for the members of CROCEU, they listened to the report of the Moderator for the year 2016-2017. Following the report the members discussed the upcoming projects for the following year. Furthermore, they discussed upon the venue of the next annual meeting as well as further details regarding future meetings and activities. In addition, the Committee received His Grace Bishop Victor of Baryshevka from the Ukraine Orthodox Church of the Patriarchate of Moscow during which he explained the difficulties that the Church of Ukraine is going through. He stressed the fact that “…the right of communities and dioceses of our Church to establish the management structure in their statutes is totally disregarded. The right to vote on a number of key issues at the law level is supposed to be transferred to the territorial communities, depriving members of religious organizations of the right to make a decision on changing their jurisdiction…”

On Saturday October 7, the Committee visited a number of venues such as the All-Chruch Post-Graduate and Doctoral School, the St. Dimitry School of Sisters of Mercy where they met with the Chairman H.G. Bishop Panteleimon of Orekhovo-Zuevo, the hospital of Saint Alexius of Moscow and the Orthodox Saint Peter’s Secondary School.

The program culminated on Sunday October 8 when the Committee participated in the Patriarchal Divine Liturgy at the Assumption Cathedral of the Trinity-Sergius Lavra. At the end of the Divine Liturgy the members of CROCEU met with His Holiness Patriarch Kirill of Moscow and All Russia where they had a heartfelt discussion on various topics.