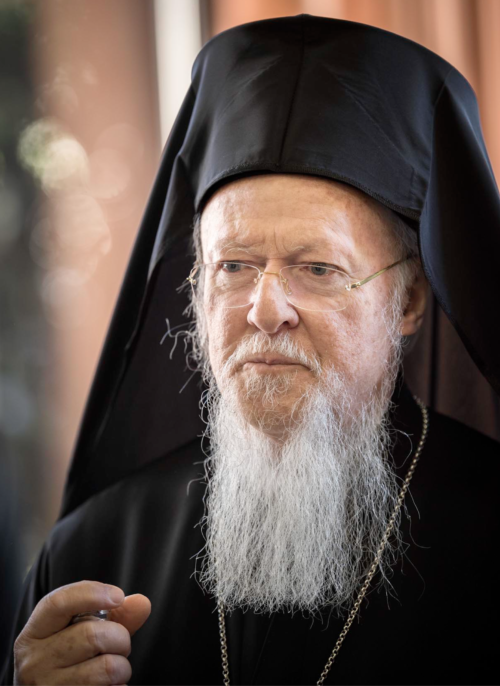 † B A R T H O L O M E W
BY GOD’S MERCY
ARCHBISHOP OF CONSTANTINOPLE-NEW ROME
AND ECUMENICAL PATRIARCH
TO THE PLENITUDE OF THE CHURCH: MAY THE GRACE, PEACE AND MERCY
OF CHRIST RISEN IN GLORY BE WITH YOU ALL
* * *

Having completed the soul-profiting Lent and venerated the Lord’s Passion and Cross, behold today we are rendered participants of His glorious Resurrection, radiant through the feast and crying out with ineffable joy the world-saving announcement: “Christ is Risen!”

All that we believe, all that we love, and all that we hope as Orthodox Christians is associated with Pascha, from which everything derives its vividness, through which everything is interpreted, and in which everything acquires its true meaning. The Resurrection of Christ is the response of the Divine love to the anguish and expectation of man, but also to the “yearning” of creation that groans with us. In the Resurrection the meaning of “let us make man in our image and likeness” and of “God saw all that He had made, and behold it was very good” has been revealed.

Christ is “our Pascha,” “the resurrection of all.” If the fall comprised the suspension of our journey toward the “divine likeness,” in the risen Christ the way toward deification through grace is once again opened for “the beloved of God.” The “great miracle” is performed, which heals the “great wound,” mankind. In the emblematic icon of the Resurrection at the Chora Monastery, we behold the Lord of glory, who descended “to the depths of Hades” and conquered the power of death, to arise as life-giver from the tomb, raising with Himself the forefathers of humankind and in them the entire human race from beginning to end, as our liberator from the slavery of the enemy.

In the Resurrection the life in Christ is revealed as liberation and freedom. For “Christ has set us free … for freedom.” The content, the “ethos” of such freedom, which must be experienced here in a manner befitting to Christ, before it is perfected in the heavenly kingdom, is love, the experiential quintessence of the “new creation.” “For you were called to freedom, brethren; only do not use your freedom as an opportunity for the flesh, but through love be servants of one another.” The freedom of a believer, grounded on the Cross and Resurrection of the Savior, is a journey upward and toward our neighbor; it is “faith working through love.” It is an exodus from the “Egypt of slavery” and of the diverse alienations, the Christ-given transcendence of an introverted and shriveled existence, the hope of eternity that renders man human.

As we celebrate Pascha, we confess in Church that the Kingdom of God “has been already inaugurated, but not yet fulfilled.” In the light of the Resurrection, earthly things assume new significance, because they are already transformed and transfigured. Nothing is simply “given.” Everything lies in motion toward eschatological perfection. This “unrestrained rush” toward the Kingdom, which is especially lived out in the eucharistic assembly, safeguards God’s people, on the one hand from indifference toward history and the presence of evil in it, and on the other hand from forgetfulness of the Lord’s words, that “my kingdom is not of this world,” which marks the difference between the “already” and the “not yet” of the coming of the Kingdom, in accordance with the most theological expression that “The King has come, the Lord Jesus, and His Kingdom is to come.”

The chief characteristic of this God-given freedom of the believer is the unrelenting resurrectional pulse, this freedom’s vigilance and dynamism. Its character as a gift of grace not only does not restrict, but in fact manifests our own consent to this gift, and strengthens our journey and our conduct into this new freedom, which also contains the restoration of our estranged relationship with creation. One who is free in Christ is not trapped in the “earthly absolutes” like “the rest, who do not have hope.” Our hope is Christ, the existence fulfilled in Christ, the brilliance and resplendence of eternity. The biological boundaries of life do not define its truth. Death is not the end of our existence. “Let none fear death, for the Savior’s death has set us free. He was held prisoner by it and has annihilated it. The one who descended into hell, He made hell captive.” Freedom in Christ is the “other creation” of man, a foretaste and model of the fulfillment and fullness of the Divine Economy in the “now and always” of the last day, when the “blessed of the Father” will live person to person with Christ, “seeing Him and seen by Him, as they enjoy the fruits of the endless delight that comes from Him.”

Holy Pascha is not merely a religious feast, albeit the greatest feast for us Orthodox. Every Divine Liturgy, every prayer and supplication of the faithful, every feast and commemoration of Saints and Martyrs, the honor of sacred icons, the “abundant joy” of Christians (2 Cor. 8.2), every act of sacrificial love and fraternity, the endurance of sorrow, the hope that never disappoints the people of God, is a festival of freedom. All of these radiate the paschal light and exude the fragrance of the Resurrection.

In this spirit, then, as we glorify the Savior of the world, who trampled down death by death, we convey to all of you – our most honorable Brothers throughout the Lord’s Dominion and our dearly beloved children of the Mother Church – a festal greeting, as, with one voice and one heart, we joyously bless with you Christ unto the ages.

At the Phanar, Holy Pascha 2021
+ Bartholomew of Constantinople
Fervent supplicant for you all
to the Risen Lord.