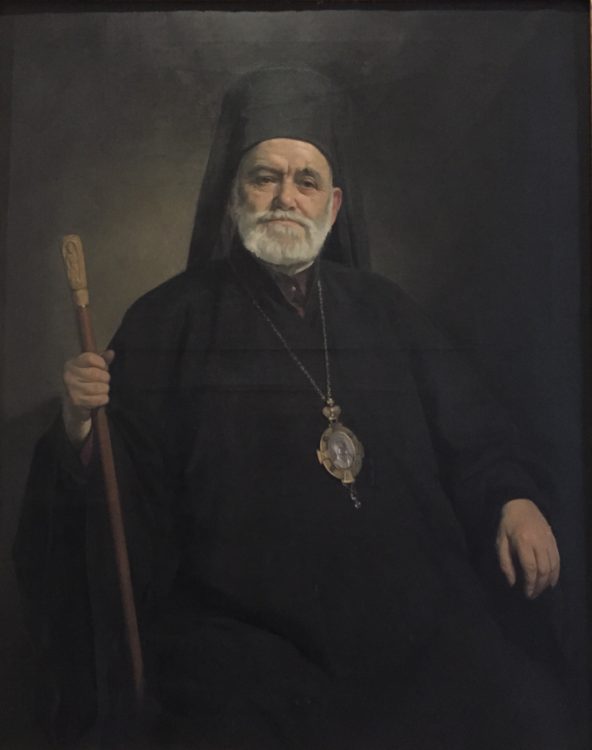 The late Metropolitan Germanos Strenopoulos (1872-1951) was born in Eastern Thrace (Bithynia), in the village of Delliones, in a modest Greek family. He studied at the Halki Institute of Theology, studies that he completed at the Universities of Leipzig, Strasbourg and Lausanne. In 1903 he received a doctorate from the University of Leipzig. From 1904 to1922, Germanos was the rector the Theological School of Halki, and he contributed, in this way, to the formation of the elite of the Greek hierarchy.

In 1912 he was elected Metropolitan of Selevkia. On July 1 of that year his ordination took place in the Church of the Theological School of Halki. Ecumenical Patriarch Ioakeim III presided over his consecration, with the participation of the Metropolitans Anthimos of Vizyi, Nikolaos of Maroneia, Hierotheos of Sissanios, Parthenios of Devra and Theoklitos of Krini. On the 24th of March 1922 he was elected Metropolitan of Thyateira (based in London) and was charged, with the title of patriarchal exarch, with the spiritual care of the Greek communities of Central and Western Europe. At the same time he became the apocrisary of Ecumenical Patriarch Meletios (Metaxakis) to the Archdiocese of Canterbury. He was in his time the most listened representative of the Ecumenical Patriarchate in all inter-orthodox and inter-christian gatherings and also as a prolific writer.

The name of the Germanos Strinopoulos is closely related to the history of the ecumenical movement, at least on the part of the orthodox participation and cooperation. Indeed, he is placed among the pioneers of this movement and among the most senior of the ecumenist figures. He joined the ecumenical movement in 1920, through the Theological Institute of Halki, acquiring an active role and participation in the drafting of the “Synodical Encyclical Letter of the Church of Constantinople to the Worldwide Churches of Christ (1920)”. He contributed actively to the founding of the World Council of Churches (WCC). He has been a member of the Committee of Fourteen, which paved the way for the merging of the movements “Faith and Order” and “Life and Work” into the World Council of Churches. During the same period, Germanos actively participated in the Movement as a representative of the Ecumenical Patriarchate and president of the orthodox delegations. In all these conferences, the Ecumenical Patriarchate was represented by officials who ministered in the diaspora, led by the Metropolitan of Thyateira Germanos, and not by hierarchs coming directly from the Phanar. At the first General Assembly of the WCC in Amsterdam (1948), he was elected as one of the six presidents of the Council.

In the meantime Metropolitan Germanos cared for the parishes in Western and Central Europe and travelled from the time to time to Belgium, where at that time there were two parishes: in Antwerp and Brussels. Those trips were not easy, but even his Metropolis had not the financial comfort to finance them. And yet, despite all the difficulties, the achievements were remarkable and a crown of honor for the great Hierarch. He died on January 23, 1951 and was buried in London.