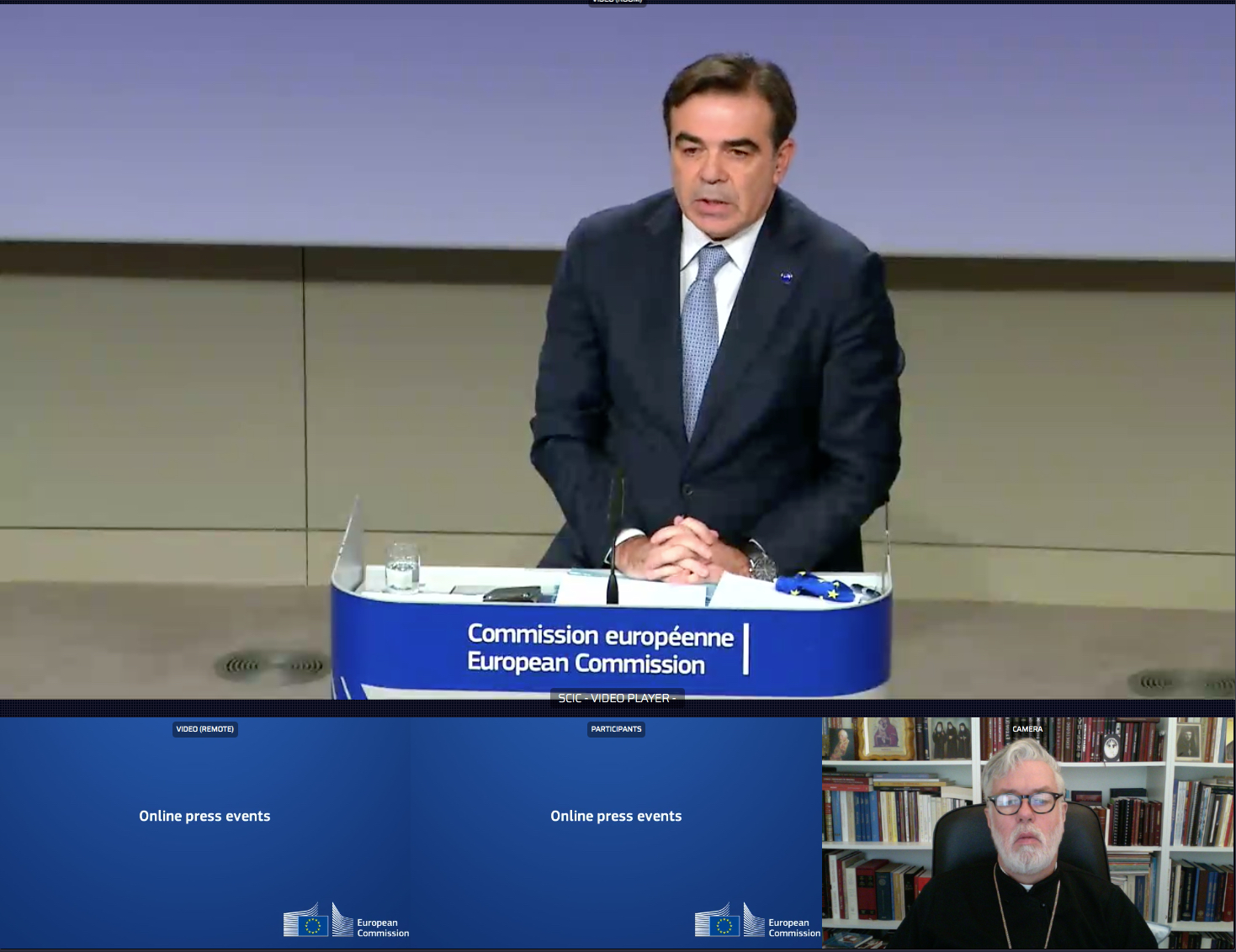 The 15th High-Level Meeting with Religious Leaders took place in an online format, on Friday, 27 November 2020. This years encounter was dedicated to the European way of living, especially in light of the pressing challenges of the Covid19 pandemic, theorist threats and migration.  You can look at the original site to learn more. This was the first such meeting under the current European Commission, and was hosted by the EC Vice-President Margaritis Schinas. Also present at the meeting was Mrs. Roberta Metsola, European Parliament Vice-President, who was just over a week ago appointed as the EP responsible for the dialogue with religious actors in the EU. The Committee of the Representatives of the Orthodox Churches in European Union (CROCEU) was represented by Metropolitan Athenagoras of Belgium (Ecumenical Patriarchate).

Opening the event, Vice-President Margaritis Schinas remarked that, although it did take a while for this dialogue to be initiated under the new EC, this meeting is just a new beginning for a much closer and hopefully regular dialogue with religious actors across the continent, which is evermore necessary in such difficult periods like the one we are currently finding ourselves in. Noting with gratitude the huge contribution of religious communities in overcoming the multisided effects of the pandemic, Schinas more than once asked the religious leaders present to continue their efforts in this direction.

On the same tone, European Parliament Vice-President Roberta Metsola pointed to the fact that the contribution of religious communities to societies has always been very significant, and only became more visible in the context of the pandemic.

The Orthodox Church was represented at the meeting by His Eminence Metropolitan Athenagoras of Belgium (Ecumenical Patriarchate), who spoke on behalf of CROCEU. In his intervention, the metropolitan showed that the ongoing pandemic has had a tremendous impact on religious life throughout Europe. “Decision makers should constantly take note of the fact that religious experience as such is a first and foremost communitarian experience, and it plays a huge role in ensuring the wellbeing of our societies. In light of this, I think we need to emphasise the need for a deeper debate in order to achieve a right balance between protective measures and fundamental human rights, not least the right to freedom of religion”, Metropolitan Athenagoras said. Further on, he pointed to education – and more specifically, Religious Education – as a most efficient tool to prevent radicalisation and terrorism, also suggesting the EC to revive the financing of exchange programs which would allow young Europeans to better know each other, in their religious and cultural identity. Finally, on the issue of migration, Metropolitan Athenagoras pleaded for a balanced approach, that would be faithful to the Gospel, while at once denouncing and fighting against structural evil, such as human trafficking, an activity which is unfortunately flourishing in the harsh context of the dislocation of populations in the vicinity of the EU and beyond. “We also need to help the new comers to integrate in their new countries, to learn the local language and contribute to social lives. The worst thing that could happen is for them to end up living in ghettos. We need to avoid this at all costs, for this too often leads precisely to radicalisation and terrorism”, he concluded.

The high-level meeting with religious leaders in Europe represents the yearly highlight of the open, transparent and regular dialogue between EU institutions and religious communities. Since 2009, this dialogue has also been enshrined into the very Treaty on the Functioning of the EU (Art. 17). Other more focused gathering take place throughout the year, at the level of experts in the field under consideration. On those occasions, religious representatives get a chance to have their say into the burning issues the EU institutions are currently dealing with.

1. Metropolitan ATHENAGORAS, Representative of the Ecumenical Patriarchate in Belgium, The Netherlands and Luxembourg
2. Prof. Dr. Heinrich BEDFORD-STROHM, Bishop of Bavaria and Chairman of the Council of the Evangelical Church of Germany (EKD)
3. Mr Abdassamad EL YAZIDI, Secretary General of the Central Council of Muslims, Germany
4. Mr Albert GUIGUI, Chief Rabbi of Brussels and Permanent Representative at Conference of European Rabbis.
5. Cardinal Jean-Claude HOLLERICH, Archbishop of Luxembourg, President of the Bishops’ Conferences of the European Union (COMECE)
6. Rev. Christian KRIEGER, President of the Reformed Protestant Church of Alsace and Lorraine, President of the Conference of European Churches (CEC)
7. Rev. Dr. Saru SAARINEN, Lutheran Church of Finland
8. Bishop Youssef SOUEIF, Archbishop of the Maronites in Cyprus