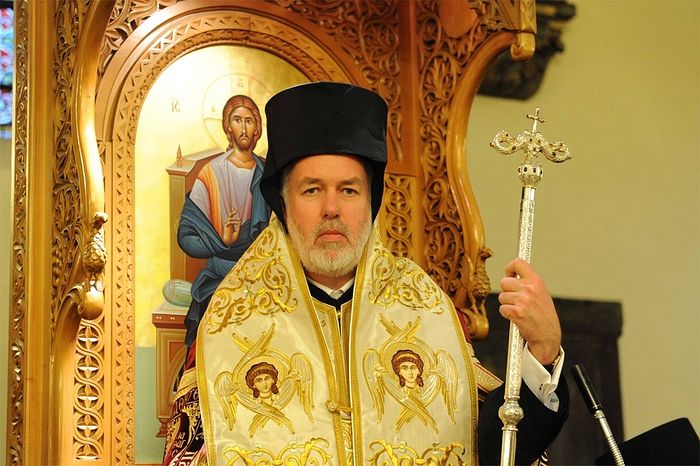 It so happened that during my interviews in Europe I met Ignace Peckstadt, the father of the current Metropolitan of Belgium Athenagoras much earlier than I met the metropolitan himself. It happened in Ghent, Belgium in 2007. At that time, His Eminence Athenagoras was the Vicar Bishop of the Archdiocese of Belgium that was headed by an ethnic Greek, Metropolitan Panteleimon (Kontogiannis). After His Eminence Panteleimon retired, the management of the Orthodox Church of the Ecumenical Patriarchate of Belgium, Netherlands and Luxemburg was delegated to his Eminence Athenagoras. This happened in November 2013.

A lot of water has flown under the bridge and many events have happened since I visited Ghent and had many meetings in other cities of Belgium eight to eleven years ago. Father Ignace passed away. His son, His Eminence Athenagoras, has been managing the Orthodox parishes of Benelux countries for more than four years. Born in Ghent, a native-born Fleming, he became the head of the mostly Greek Archdiocese. Nowadays, the Archdiocese is becoming less monoethnic due to conversion of locals to Orthodoxy.

In addition to managing the Archdioceses of Belgium, His Eminence Athenagoras is also the head of the Ecumenical Patriarchate’s representative office in the European Union. For several years, it was the only office representing Orthodox Christianity in the European Union organizations in Brussels, before Greek, Cyprian and Romanian Orthodox churches opened their offices too. The representative office of the Russian Church in Brussels was opened in 2002, but now this office in the capital of Belgium does not have a fulltime employee. Igumen Phillip (Ryabykh), the representative of the Russian Orthodox Church, lives in Strasburg and visits Brussels every now and then, as necessary.

According to His Eminence Athenagoras, there is no need for so many Orthodox representative offices in Brussels. The Metropolitan’s explanation is to a great extent based on the point of view of his Patriarchate that is striving to play a certain role in Europe.

“We bought a building and opened our office in January 1995,” says His Eminence Athenagoras. “But currently there are too many representative offices of Orthodox Churches in Brussels. I don’t see any particular sense in it, for earlier we could function within one platform. Why spend money on buying a building in Brussels if there are only two people working there? If you need to attend a meeting, you can fly there from any European country in 2 or 3 hours.”

“Don’t you think that these meetings are no longer attended by high level officials? Instead of the President of the European Commission, the annual meetings with the leaders of religious organizations are now attended by the Vice President.”

“I think it is because the Vice President of the European Commission is now in charge of maintaining relations with religious organizations (not the President, as previously). That is why these meetings are attended by the Vice President. I don’t think that this signifies the decline of these relations.”

“However, fewer religious leaders are now invited to these meetings…”

“Perhaps, it has to do with the financial aspect, as there are accommodation, travel and other expenses,” His Eminence replied.

“The meetings are held in accordance with the corresponding article of the Treaty of Lisbon that is the basis of the European Union. Unfortunately, you are probably right when you say that these meetings do not result in taking concrete actions or implementing specific projects. We see that good initiatives are welcomed, but sometimes it does not go any further,” concluded the Metropolitan.

There were a lot of things that I wanted to discuss with His Eminence. He is serving in one of the most liberal countries of Europe, which has legalized practically everything that goes against Christian morals, including abortion, same sex marriages and euthanasia. There were also cases of discrimination against Christians in Belgium. For example, last December the Red Cross locations in Liege were requested to remove crucifixes and images of the cross as these Christian symbols allegedly undermined the principle of “religious neutrality”. There were also other developments that left the Christians feeling uneasy.

Paradoxically, despite its liberal views, Belgium formally recognized Orthodoxy. It even provides financial support to Orthodox Christians. As Metropolitan Athenagoras represents the interests of all Orthodox Christians of Belgium, I naturally wanted to know what Orthodox Christians were doing to stop the creeping discrimination of Christianity that is gaining momentum in Belgium and many other European countries.

“It should be noted that we live in a fully secularized country,” said His Eminence Athenagoras, commenting on the examples of discrimination against Christians. “Many people live as if there is no God; they are prejudiced against Church. It is very difficult for us to influence anything. Yes, we organize meetings with other Christian churches and discuss these problems. However, in addition to six major religions the Belgian government also recognizes humanists who act like a religious community (although they believe in man rather than in God). Humanists are supported by Masons in the Parliament and government. Sometimes it feels like they want to sideline us.”

“I understand, of course, that there are many opponents of Church and Christianity in the government of Belgium. But there are supporters too, aren’t there?”

“Yes, there are. Currently we are trying to gain the right to broadcast liturgies on television. Our opponents say that this is not a priority for the television. But why should we only watch soccer, concerts or nature shows on TV? We have the right to demand something as we are part of the society.”

“Have you tried to do anything to change Belgium’s laws? Make them more Christianity-oriented? For example, in the area of family relations or abortions?”

“The law legalizing abortion was adopted in 1990. I was a young deacon then. King Baudouin refused to ratify this law, primarily citing his religious beliefs. Then the Prime Minister of Belgium, referring to a precedent that occurred during World War II, suggested that the King should abdicate for one day so that the law could be promulgated by the government. The king agreed. After that the Parliament voted to reinstate the king, and practically all the senators voted for the king to resume his duties. Baudouin risked losing his throne, but senators supported the monarch. I think nowadays this would not happen as the senators would not support the king. Naturally, the Catholic Church was against this law, but its protests were not successful. When the law on euthanasia was adopted, practically all religious organizations protested it. They were not successful either. Politicians demonstrated that the power is in their hands.”

“This is probably another consequence of the dominance of secularism in the Belgian politics?”

“There was a time when the Catholic Church played a dominant role in Belgium and was quite powerful. Times have changed. Now the principle of anything goes is prevailing. For example, Elio Di Rupo, our previous head of government, was openly gay and ‘married’ to a man.”

“Do the authorities exert any pressure on the Orthodox Church, which maintains a traditionally Christian, Biblical approach to family and marriage?

“No. In Belgium, Church is separated from state. On one hand, the law tells us to respect people with other ways of thinking and different lifestyles. On the other hand, they cannot force us to perform same sex marriage weddings.”

“Your Eminence, there is also a question of whether you can openly state in Belgium that from a Christian point of view same sex marriage is a sin and that it contradicts the Holy Scripture?”

“I think, we can. For example, we can say that according to Church tradition and tradition based on the Scripture, we cannot endorse same sex marriages. Here, of course, another question arises in view of our discussions with Anglican churches (I am currently a co-chairman of the International Commission for Anglican-Orthodox Theological Dialogue). As you know, Anglicans have openly gay priests and bishops. What can we do about it? We can react somehow and say that we don’t like it. However, the problem is that there are also homosexuals among the bishops of Orthodox Church. Naturally, they do not publicize it, but we know that unfortunately there are such people among us.

“Although, I think that there is an important difference: in Orthodoxy nobody thinks that same sex relationships are acceptable; on the contrary, they are considered to represent a serious, mortal sin. At the same time, for Anglicans, especially in the US and UK, the notion of the sinfulness of homosexuality became eroded and even disappeared completely. When an Anglican priest is not embarrassed to openly talk about his same sex ‘union’, I feel ill at ease. Anglicans sometimes refer to the first chapter of St. Paul’s Romans as the “anti-gay statement”, but this doesn’t change the strict and cautionary words of the Apostle or make their meaning any less clear.